By using virtualisation, you can install multiple operating systems and programs on a server in parallel and at the same time, in a way that whenever the CPU, Graphics card or storage is required, they can receive enough of these shared resources. Virtualisation of a server is only the beginning in this unique scenario. Creating totally virtual infrastructure on hundreds of servers and storage is an aim that easily be realised using virtualisation. By utilising this scenario, not only will savings in hardware resources and costs be realised, but a dependency on hardware in your operating environment will be reduced and replacement and update of systems will become easier. Therefore easier management and simpler support are the greatest benefits of this approach.

For virtualisation there are many products from different companies that exist. The best of these are from Microsoft, VMWare and Citrix. VMWare is currently the market leader by some distance compared to its competitors. 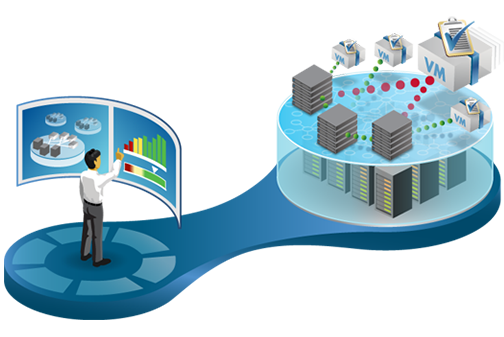 To start, a search needs to be carried out to find the most powerful Hypervisor. Hypervisor or VMM is a program that allows the installation of multiple operating systems at the same time on a server or client machine, and with its management of hardware resources being shared by the operating systems and requested software. VMWare ESX is the most powerful and proven Hypervisor that exists in the industry and it’s definitely the best choice among Hypervisors for creating a cloud environment.

The services of ICTN (Virtualisation):